Click to continue reading >>
Posted by clodjee at 10:29 pm No comments:

First, the domestic log. Indeed the Operating System of the Mac Mini got corrupt somehow and I had to use Time Machine to restore it. However, even Time Machine had a problem and I had to go back to a week-old backup to successfully restore the whole system and then restore more recent files individually. It took a while to do all that (each unsuccessful restore took several hours). It seems that everything stopped working properly since I also had problems with both my microwave oven and the regular oven (I will have to replace one and repair the latter).

We also had a bunch of medical appointments (dentist and GP). My blood-pressure medication was changed (for a stronger one) and the diagnosis of benign paroxysmal positional vertigo was confirmed. The most frustrating aspect of it is that I endured vertigo for over a month and a simple Epley maneuver solved the problem in a few minutes! Last year I was too busy to do any of the medical tests that my GP ordered, so this year I'll make damn sure that I do them all.

I've spent the little spare times that I had left doing some clean up in my office (getting rid of a few more boxes, either putting books on shelves or shredding useless paperwork for recycling. We moved nearly two years ago and I still have plenty of boxes laying around). I also got a cold (luckily, so far, it's not the terrible flu that everyone is talking about. Of course, I suffer from it not at work but during my days off!) and a water pipe broke down the street last night and we were nearly ten hours without water. Despite all that (there's no respite for the restless, so now I am trying to catch up on my blogging) I still found many interesting news stories that I would like to share, so please check the links after the jump:

Click to continue reading >>
Posted by clodjee at 7:38 pm No comments:

The Rose of Versailles

Yesterday, Viki (the Asian content streaming site) posted an update for their iOS app and this reminded me that they had announced in September that they would stream The Rose of Versailles (See ANN & Wikipedia). I had completely forgotten! So, without losing a moment, I took my iPad out and watched the first episode. I haven't screened a classic anime in a very long time and I felt great. I really miss watching anime daily... (now I just have to find time to watch more episodes. BTW, they are still streaming Oniisama E...). It is really great, so please take the time to watch a few episodes of The Rose of Versailles!

At about the same time (a few days earlier), Right Stuf's Nozomi Entertainment announced the DVD Release of The Rose of Versailles Part 1 Limited Edition. The first set will be available on May 7, 2013 (it will include 4 discs, 480 minutes (20 episodes), Japanese audio with English subtitles and on-screen translations, $49.99 US, suggested for age 13+).

The original manga by Riyoko Ikeda was first serialized in Shueisha's shoujo anthology magazine Margaret in 1972-73 before being collected in 10 volumes. It was so popular that it was adapted in a live-action movie and several stage musicals by the famous Takarazuka Revue troupe. In 1979-80, it was also adapted into a 40-episode anime series by TMS under the direction of Tadao Nagahama and Osamu Dezaki. The Right Stuf's dvd set will be the very first english language release of this series.

Set before the French Revolution, The Rose of Versailles is a tale of romance and political intrigue that centers around Oscar François de Jarjayes, a young woman who was raised (and military trained) by her father as a man. Following a duel, Oscar is appointed Commander of the French Royal Guards in order to protect Marie-Antoinette, the fiancé of the prince and future king, Louis-Auguste. For more details, check rov.rightstuf.com.

The anime and the manga are also available in French at your Montreal's local library. 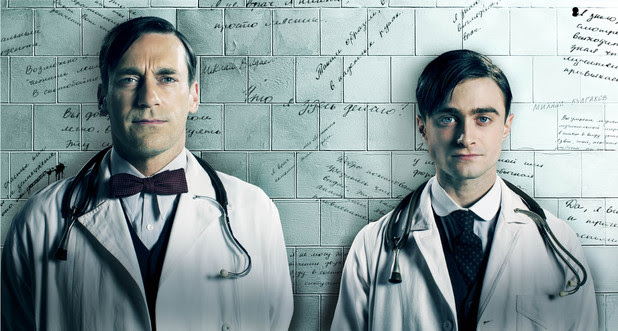 As usual I stumbled on this TV mini-series by pure chance (my wife read about it in a magazine and I looked it up on the internet). The prime interest of this British TV series from Sky Arts 1 HD is that the main protagonist is played, in his young age, by Daniel Radcliffe (of Harry Potter's fame) and by John Hamm (from Mad Men), as he is older.

Click to continue reading >>
Posted by clodjee at 11:03 pm No comments:

In the last couple of weeks I've spent much of my free time working on finishing the kitchen/bar-type counter in the back of my office (completing the base, installing the counter itself, the sink, and connecting the plumbing). It now looks pretty good, but it still need some finishing touch (finishing panels and doors). I've also installed a few more softwares in my new iMac and cloned its hard-drive for an extra safety (I use and trust Time Machine but you never know...). However, I am starting to experience problems with the Mac Mini so I might have to reinstall the OS on that one too. I still had time to read some news online and, as usual, you'll find the links after the jump:

Click to continue reading >>
Posted by clodjee at 4:15 pm No comments: